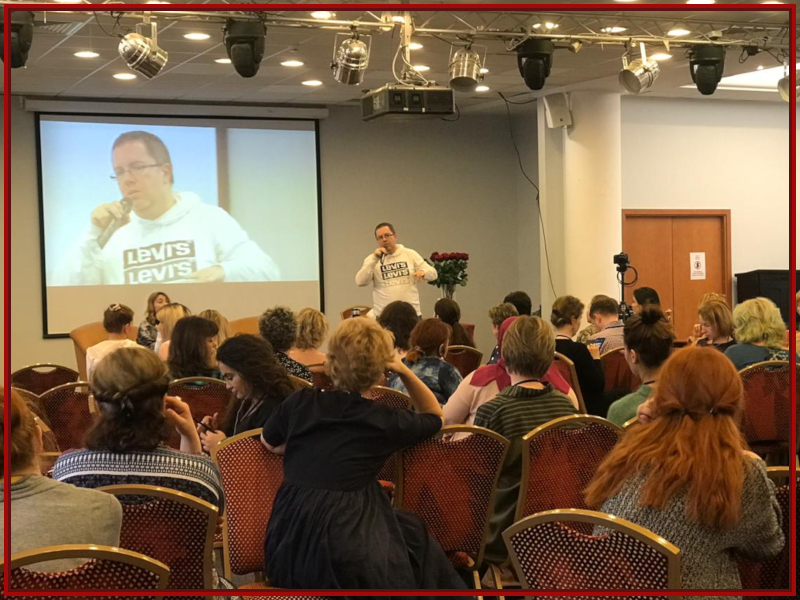 Recently I attended an event which was scheduled in a country which is not normally known for hosting conferences or seminars in the market sector I work in. By trade I now work in events management, coaching and seminars – after having experienced the rat race of London. My background, is events management with a good spell working in the security sector. That has given me a good foundation in planning and logistics for events, both big and small. Running a team of over 100 people is not a challenge anymore, it’s a skill developed through trial, error and experience. So back to this event I went to, and I can tell you that this was the second time I attended this specific companies events.

Now the event I went to featured two international speakers, and a number of Russian speakers. And the theme or overall concept of the event was to initiate a positive change for attendees. Or at least that is what I understood from the information and messages I received. It was about transformation. I guess I might be a bit too critical sometimes, as I know what goes into the running of an event, so I won’t criticize this specific event, but I will look at giving you some food for thought in a more general sense.

The one speaker, had some time to speak to me, and I took the opportunity to ask his thoughts of Tony Robbins and the events he runs. The speaker was able to work with the Tony Robbins teams for about a year and a half as a speaker in one of their programs, from what I understand. And that in itself is a good thing! And what was super interesting was that he decided that his vision or direction was not in line with the Tony Robbins team. Ok so that might sound like a bit of a scandal, gossip or some negative feedback about Tony Robbins right? Well – the answer is no. I am not about to start a rumor, and I am definitely not going to attack the Tony Robins events. Hey I have been to two of them myself, and I got something positive out of both of the events I went to. But maybe not the type of results you would think.

Let me focus on the vision or mission concept and then you will have a better idea of what I am going to suggest!
It’s always great to have an opportunity to get your message across to others. If you connect then you gain the ability for more people to understand your message, as those who connect will start to share. And in doing so, if you are selling a product or a service, that connection is super important.
When you don’t connect, when your message is filled with hot air and no content then the chances are that you will burn up the opportunity to reach a new audience. Those who listen to you, and those who like you, will tell others about you. And those who get super excited with hearing your message and then end up feeling robbed of their time as your message did not give them that impact that they expected, they will spread the word like a flash fire that others should not waste their time listening to your message. It is a difficult thing to get right, and there are a number of elements that need to be considered.

One of these elements is the stage or platform you use to get your message out there. If you were to attend an event where you had some seriously good speakers on the stage, where their content was incredible, then it pushes you to a higher level of expectation. If you can’t compete, if you filled your speech with wasted information, then you could get written off by the audience as empty space. But if you have practiced your delivery, if you have that one moment of connection, if you shine brighter than the other speakers then you will make a huge impression on the audience.

Tony Robbins again – not attacking him or the organisers. But giving you a clear example of how important it is to chose the platform you use to get your message across. 26’200 people attended the first ever Tony Robbins event in Moscow. From what I have heard and read on social media – the registration process for the first day took over 4 hours to complete. Scheduled starting times were more or less kept however with most of the audience outside in the queue it meant a lost opportunity. And then all the backlash. The audience had a totally different expectation of what they would get. Some who paid super high prices to get into the VIP seating area, found that they did not get the seats they were promised. It seems some who paid the cheapest prices got into the VIP seats, and one person who paid the super high price got into the area to find that his specific seat number did not exist! And then the legal actions that were reportedly started after the event ended with people wanting their money back.

You see – the whole issue with this is that if you are part of an event that has these issues, even if you are one of the worlds best speakers with super hot content, then by association with the organisers you are immediately put onto the back foot. I was once told that for every negative issue it takes ten positive things to rectify it. In this sense, how many other events would you need to take part in to get past this one bad one. And I know and understand what happened at this event, but that won’t change the fact that there is now this subconscious thought or belief that has been created as a result of this event that foreign speakers coming to Moscow is a waste of time and money for anyone to attend. I do know of a number of people who did have a great time, who got thought the registrations, who had a super event. But for the rest, who knows what they think now.

The event I recently attended with this foreign speaker. He said his vision was not in alignment with the Tony Robbins events. And based on the outcome of the first Moscow event I would be brave enough to say that I understand why! When organising a huge event, when huge sums of money are involved in both the ticket sales and also the expenses incurred to run the event. If the message or vision that is created by the organisers is that they are only focused on money, that they are not concerned with the well being of the attendees, then that becomes a risky game that could backfire. In Moscow – the impression was created that the organisers were not focused on the wellbeing of the attendees. Apparently not enough water, not enough batteries for the translation devices, proper and clear seating arrangements were not given to all the staff and security team, and who knows what else? Am I knocking the organisers?

As someone who is in the same industry of events management, as someone who cares about the health of the events industry in Russia, as someone who knows the risks involved and knows then financial rewards and possible reputation gains that could be achieved from a successful event.
As that someone yes I am having a go at that event.

I can’t pass comment on the organisers intentions. I don’t know them personally. I can draw my own conclusions about the marketing team, as I do know one of the companies involved in the marketing.
So based on the outcome of what happened and also on the feedback from the event I just attended – here are the lessons to be learnt!

One.
Make sure that the vision of the organisers is in line with yours.
Don’t set yourself up for a huge social media backlash as that could end your career in getting your message across very quickly if things get messed up.
Two.
Find out who the other speakers are who are attending the same event as you. Then do some research, and work hard to make sure that as a minimum your are on par with the message you get across, compared to the other speakers.
Three.
If you are new and just starting out, then you can afford to take risks and chances with who you are associated with. If you have already built a reputation then make sure you are not going to damage what you have built up by being associated with a bad event.
Four.
Be ethical and have courage to give your audience good content and not a balloon filled with hot air.
Five.
Dare to stand out with excellence! By being an example to others with your message, with your delivery, with the connection you make to the audience, you will not only help yourself but you will set a higher standard of service to others, and the rest of the pack will have to improve their game to keep up with you!